Making sense of all this chaos

Tomorrow, Hope And History Must Rhyme

The lines below are from The Cure at Troy, based on Philoctetus, a Greek play about Neoptolemy’s journey to seek the aid of a former hero, driven into reclusion. Neoptolemy is the son of Achilles, a hero whose flesh was immortal everywhere but his heel and whom the Greeks surely could have saved if they just cauterized his wound. Philoctetus is an interesting foil of Archilles and, at the play’s opening, has barely managed to survive a wound festering for ten long years.

On this side of the grave,

But then, once in a lifetime

Of justice can rise up

And hope and history rhyme.

The lines were quoted by Bill Clinton in 1995 and, most recently, in Joe Biden’s recent lecture for the Brzezinsky Prize. For Greece, the Trojan War was so unprecedented, Homer rendered it the architypical war in Greek mythos. The Odyssey was a loom upon which the greatest of all Greece’s legends would be woven – or at least of those moreso focused on the works of men than that of the gods. To me, Philoctetus represents a type: an veteren of war, whose actions consequently and unjustly wrought upon him repulsion, judgement and extreme isolation. He was abandoned alone on a island where he saw no one for a decade because the inconvenient stench of his wounds would not permit Agamemnon and the Greeks to honor the Gods. Until a captured oracle prophesied the Trojan War’s conclusion rested upon the full engagement of all Greece – with even the support of the dejected Philoctetes-type, whose story remained unknown – then the war could never be won.

Philoctetes On Lemnos With Wounded Ankle 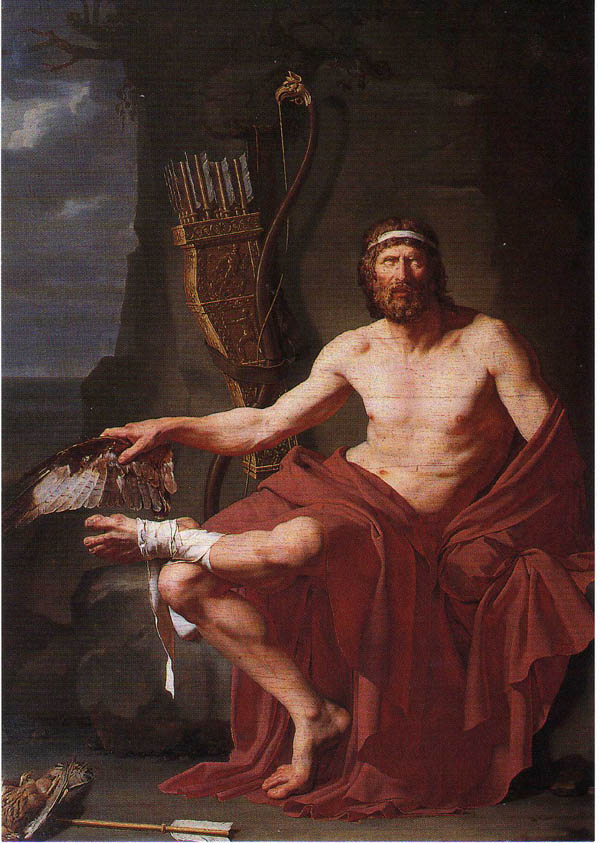 We Could All Be Philoctetes

Philoctetes and its interpretation is incredibly relevant in our time. To me, Philoctetes represents dejected individuals of many types, whose story and whose energy is inconvenient or difficult to engage. There are so many people like this: those who need health care, those who cannot live without social programs, those veterans who cannot afford health care. Unless we engage these individuals, gain their support and do so in the manner of Neoptolemy – without deception and empty promises – we will never conquer what lies before us in history. If we operate on the assumption that we can consign figures tainted with the inconvenient truths of reality to islands, but steal their support when we need it, we operate moving forward with the assumption that it is OK to use figures, who must bear the details of their life in solitude and in shame.

People use the energy of others towards some goals. This is how life has always been and we all know it; this is why we must transcend what has happened in the past. When the goals and objectives are shared, this can be justified. However, this is not how life will be moving forward. We must engage every single person. This is a revolution of empowerment. We will combine our energy, using knowledge and wisdom as a basis for bringing into phase everything that every single individual has to contribute. There will be no one left behind.

So, Tomorrow, Hope And History Must Rhyme

In bringing our energies into phase with one another and in operating with an altruistic set of values, America and the world over will combine our potentials, starting with the unshacklement of every individual. When the narratives of history are in phase with Platonically ideal myth – the kinds of stories that inculcate strong, heroic values systems in each new generation – then these stories empower us to stand fearlessly against any challenge. Regardless of the personal cost, it is our values that matter; that is what we fight for and we know how our heroes would do it. The narratives of our future history must amplify hope and reason with a story that underscores humanity’s conquest over greed, lust for power, and meticulously crafted ignorance, in spite of the odds. Power from the people: every person in this world is a chance to contribute towards the advancement of society and towards the uplifting of every one of us.

When we wake up in this new world, our story will form a collective historical narrative of cooperation, illumination and societal actualization. Sociopolitical currents around the world must lend themselves towards societal metempsychosis. Unrestrained chaos – without the metaphysical jujitsu of those antifragile mechanisms to align any and all energies – exacerbates traumatic turbulence whose energy creates catastrophe, taking another eye for every eye. This would end with centuries of a new dark age wherein the forefront of all memory persists a neodeluvian narrative.