Ain't Nobody Got Time For Studies

Obviously, citing studies is the proper way to go about things, but I am interested in far too many topics and unexplored ideas. And I definitely don’t want to do this in a Facebook debate, where no matter how hard you research, when you’re right, your facebook friends are just going to shit all over the thread with memes anyways. That just pushes your words so far up the thread that no one will ever read them again. Doesn’t happen to me because I don’t debate on FB a lot, but I’ve seen it happen to others. I usually only discuss these topics with a select few people who are OK with differring opinions. If you’re going to spend time creating something, Facebook comments probably aren’t the best time investment.

And if I focused significant time on searching for studies, I’d never finish, limiting the topics I can explore. And I get bored way too fast. Oh and uhhh hey everyone … the house (the world) is on fire and burning down. And you are trapped inside. Are you sure you want to wait for studies to show the house is on fire? Studies that are so often financially motivated? The burning house is a Mahayana Buddhist metaphor by the way. 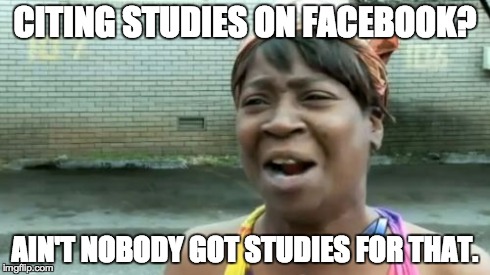 There actually are studies that show the following.

And now a snippet from one of the best anime’s ever: Steins Gate.

Much of this information will take decades to disseminate – if you can convince corporations to finance studies which may show their products are not only worthless, but detrimental. Yehh … that’s not going to happen very fast. Or very effectively, when you consider the myriad of ways the academic community can limit the exposure of dissenting information.

“I’m a corporation and I’m going to finance science which expands risk and limits profits.” - Said no corporation ever

It’s hard enough to convince corporations to finance science which may significantly limit their liability in the long term. This will slow them down and may entirely prevent their ability to profit, ever. Tell the investors on their board of directors this is OK and you’ll be cleaning out your desk later that day. It also might mean risking losing their competitive advantage. And maybe it’s a study that gets misinterpreted and used against them.

Ouroborosian Economics. I just made that up. Can you tell? It’s got a nice ring to it.

Not really a “thing,” but there’s a great Sarah Silverman edisode about this: “High, it’s Sarah.” She gets really high and leaves herself voicemails to remember her great ideas, which is something I used to do back in 2005 – before it was cool… But she also uncovers this deep conspiracy between chemical, pharmaceutical and food corporations, where they all wash each others’ dirty hands. And people get really bad diarrhea as a result, but it’s OK because one of the chemical corporations also makes the toilet paper. Shitty, right?

Step 1: Create a problem or find one that exists.

#### Step 2: ????? Create a solution for that problem and make sure the solution creates new problems. #### Step 3: Profit!!! Now solve the additional problems you just created.

Congratulations. You have competitive advantage because you’re aware of the problems you just created. Keep calm and profit on. Don’t sweat the haters. They’ll be payin you anyways, one way or another.

One hand washes the other, right? So abstract the process above and coordinate multiple parties. Now you have limited liability with plausible deniability. Because your corporation couldn’t possibly anticipate what that other corporation in a completely separate industry was planning … riiiigghttt.

Ultimately, this is very, very, very bad for everyone.

The problem? Economics is Zero Sum!

That is, the resources alotted for one problem can’t be spent elsewhere. So therefore, if we invest a majority of the GDP in fixing preventable problems, then we can’t invest that money elsewhere. Maybe someone gets rich from creating these problems. Must be nice.

However, if this doesn’t change, we will never progress as a society. We might solve some problems, but at the expense of creating new ones. And in our generation, it turns out that ultimately, these cumulative problems will be catastrophic!

And RIGHT NOW! we need that money to help clean up the problems we’ve created. I mean RIGHT NOW! THE FUCKING HOUSE IS ON FIRE AND WE ARE ALL GOING TO DIE. But we’ll probably be OK, as long as a few greedy fucks stop screwing it up for the rest of us.

And I’m not hating on capitalism here because that’s not the problem. This is closer to the economics you see in oligarchies than in capitalism.

If you look just close enough, you’ll find that we have what we need.

Anyways, getting back to the unexplored problems that I’m trying to prove exist. I really can’t be bothered to find a study right now. Most of the information is there if you look for it. I’m reviewing information that has already been vetted and I’m not doing this professionionally. I’m just interested in learning about the world around me.

Besides, short-sighted myopics created most of the problems we see around us by operating with a very narrow understanding of the world around them. And these are the same people we’re going to trust with producing information that shows they were detrimentally wrong the whole time? They only know about what they learned in those 4 to 8 years of school. And I think you’ll find that most people stop learning after they graduate. Doctors. Engineers. Business Majors. I’m kidding, business majors mostly partied through school, remember? And now all they do is count the money.

Sometimes there just really isn’t enough evidence to prove these problems exist until later on. But if we were a bit wiser, we’d be more cautious.

The good news is that computational medicene should provide us the leads to identify that which we haven’t discovered. These leads will allow us to invest much more wisely. Computational science will improve drastically as well. Bad news if you’re at risk for significant liability!